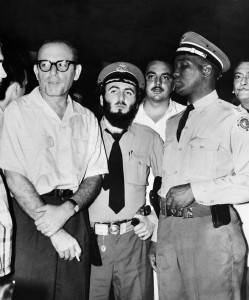 Former casino operator Santo Trafficante Jr., 43, left, of Tampa, Fla. was detained by police in Havana, Cuba, June 10, 1959. He is custody of police captains Sergio Martin Vidal center, and Ignacio Barbon, right. Trafficante was arrested at his home in fashionable Vedado district. Police announced detention but gave no reason for the action except for questioning. (AP Photo/Harold Valentine)